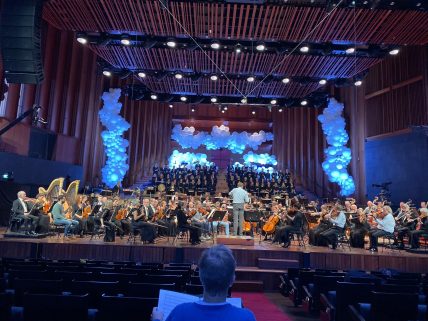 Hellstenius describes his new work, written for the 100th anniversary of the Oslo Philharmonic, a “compositional interpretation” of Edvard Grieg’s “Landkjenning” for choir and orchestra with a text by Bjørnstjerne Bjørnson. Hellstenius made a similar interpretation of Robert Schumann’s song cycle Dichterliebe in 2015, while he was the Oslo Philharmonic’s composer profile of the season. This way of reinterpreting classical works is inspired by the German composer Hans Zender, and the idea is to breathe life into the works, make us hear them afresh and feel that the music is relevant. It can be compared to how old texts are reinterpreted in the theater, where the text may be changed and new text is added.

The text of Landkjenning is about Olav Tryggvason, coming to Norway to Christianize the country. In Bjørnson’s text, national and religious conceptions merge. This combination isn’t as strong today, and Hellstenius has changed the end of the text. Here it describes unity with nature instead of a turn toward God. Musically, Hellstenius begins the interpretation in the midst of Grieg’s work, and gradually lets it spread. Grieg’s heroic opening as Olav Tryggvasson steps in from the North Sea is gone − instead, the choir sings weakly and unanimously. Grieg and Bjørnson, in line with the religious and national romantic ideas, composed a highly dramatic end to Landkjenning, where the choir sings with full force and religious conviction “… filled with Him!”. In Hellstenius’ new version the play ends with an opposite character, soft and inquiring, and chorus, percussion and harp instead repeat an incomplete line of text that ends openly: “… filled with …”.